The instruction to select a display mode for a selection menu on a screen which serves the sole purpose of presenting the menu items displayed and the fact that there may be further items available in a particularly clear manner does not concern a technical means for solving the technical problem and therefore is not to be taken into account in the examination as to inventive step (confirmation by FCJ, GRUR 2015, 660 – Image Stream (Bildstrom); FCJ, GRUR 2015, 1184 – Unlocking Picture (Entsperrbild)). (headnotes of the court)

The defendant is the proprietor of the patent in suit which is the subject of a nullity suit. The patent concerns an electronic device with at least one display 1, see the copied figure 1 below. Display 1 represents a menu 2 which can be rotated by a user. Some of the menu items in menu 2 are outside the display 1. Menu items outside display 1 can be rotated into display 1 if necessary, and menu items inside display 1 can be rotated out. The German Federal Patent Court has deemed the patent in dispute to be not patentable and has declared it invalid in its entirety. The defendant is appealing against this decision. 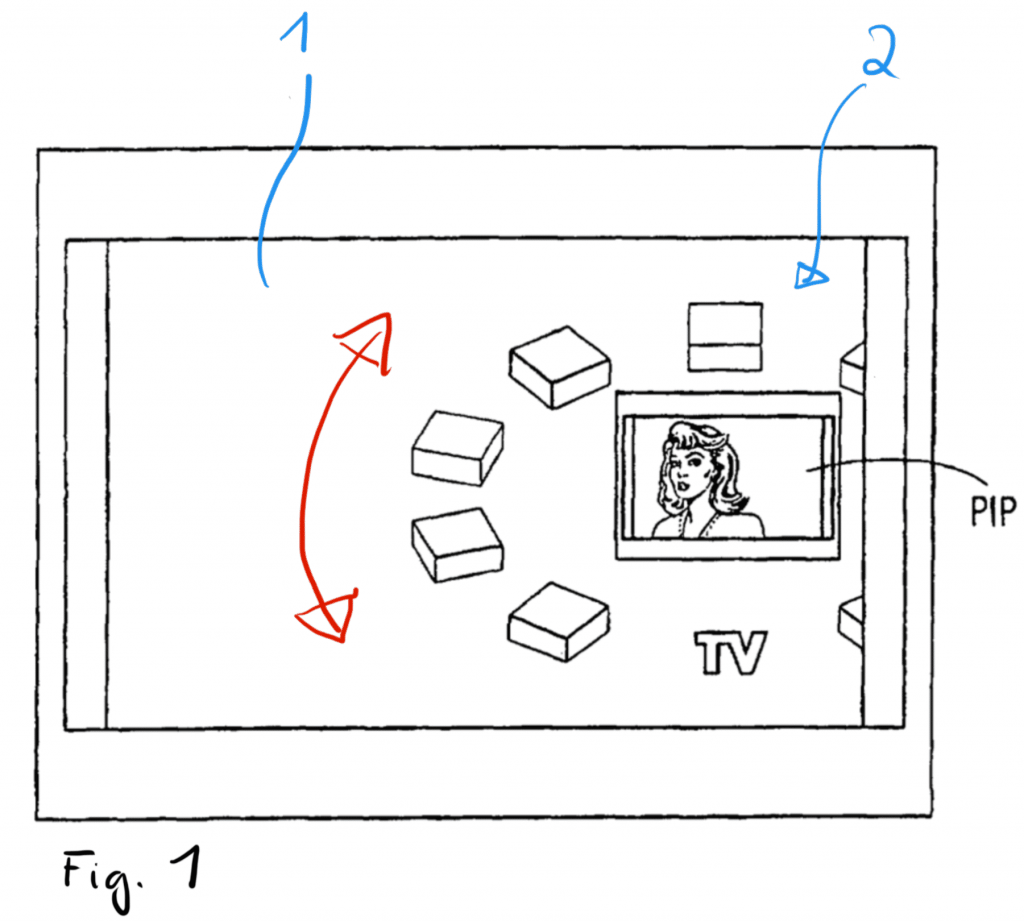 Features not taken into account in the assessment of inventive step

The feature in claim 1 of the patent in suit, that menu 2 is rotating, is not taken into account by the FCJ when assessing inventive step. According to the FCJ, this feature does not allow a more efficient use of the available display area. It merely serves the purpose of presenting the displayed menu items and the fact that there may be other items available in a particularly clear manner. Thus, only the human imagination is taken into account. According to the case law of the Senate, this does not constitute a technical means for solving the technical problem (FCJ, GRUR 2015, 1184, para. 21 – Unlocking Picture; FCJ, judgement of 26 February 2015 – X ZR 37/13, GRUR 2015, 660 para. 31 et seq. – Image Stream). Thus, the described feature is not taken into account when assessing inventive step.

Further features regarding the menu are considered

In contrast to the feature that menu 2 is rotating, other features in claim 1 of the patent in suit concerning menu 2 are taken into account by the FCJ when assessing inventive step. For example:

According to the FCJ, these features have the function of using a spatially limited display area for the display of information. The information cannot be displayed all at once due to its size and format. This technical problem is solved, according to the mentioned features, by a certain spatial arrangement of the displayed information. This is not only an appropriate and easily understandable presentation of the information, but also a technical solvent, namely an appropriate use of the available screen area. Thus, these features are taken into account by the FCJ when assessing inventive step.

The decision of the Federal Patent Court is confirmed by the FCJ, since the claimed subject matter is not inventive.

Helpful indications of purpose in the patent

The features of menu 2, which were taken into account in the assessment of inventive step, fulfil a technical purpose: they lead to a better exploitation of the display 1. The feature relating to the rotatability of menu 2 only leads to a particularly clear presentation of the menu items. Thus, this feature does not take into account the physical conditions of human perception and reception of information. If this were the case, this feature should have been taken into account. Such features can be found, for example, in the subject matter of the judgment in the case FCJ, GRUR 2015, 660 – Image Stream. In this case, a certain presentation of information leads to a user being able to grasp the information quickly and efficiently. It is possible that such a purpose statement in the patent in dispute in the present case would have led to a consideration of the feature regarding the rotatable menu 2 in the inventive step considerations. Of course, only if this purpose would have been technically correct.